Our adventure started early in the morning. A little earlier than some would have liked, but I am a freak about getting to the airport/train station early. here we are waiting to catch the knitting train at the emeryville station (well not me because someone had to hold the camera…)

note that b and abby are sporting handmade hats, and sarah is wearing a scarf that she knit. As a new knitter, Carmen has only ever made two pot-holder-like squares, so I am kinda glad she wasn’t wearing anything that she knit…. Soon
after this we headed out to the tracks and a zealous knitter announced that the knitting car was already full. I knew it was too much to hope that lisa had saved ~6 seats for the last 2 hours. As the train pulled in, we saw lisa waving to us from the top of the knitting car. indeed it was full. and they were out of goody bags. We walked a ways into the car to find lisa, and man were there some grumps on that car. Lady working on the blue scarf, i am sorry that i bumped into you. That is why I said ‘Oh! Excuse me! I’m sorry.’ You don’t need to make a snit face and roll your eyes. It was clearly a very full area. But on the whole the knitters were a very chatty, friendly group. but we did manage to get one free ball of yarn and some raffle tickets, even though they were out of goody bags. Then we headed farther back in the train and made ourselves at home. 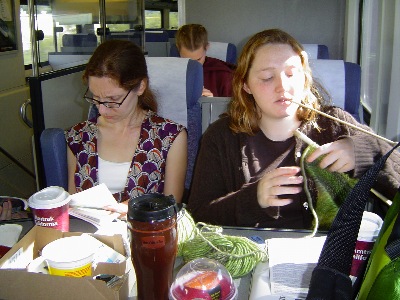 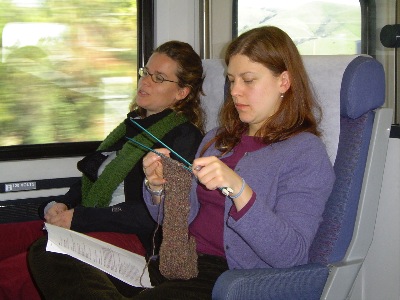 Sarah chatting away and Wendy
working on her scarf Somehow those are the only two pictures I took. I guess I was anxious to start knitting. The ride was awesome. We went past the salt flats in the South Bay and got to see snow on top of the “mountains” (weird b/c they are only about 2000 ft and it never snows here). I loved it! The captain (pilot? engineer?) of the train frequently came on the speaker to say that the knitting car was full and in doing so often mentioned “The Knitting Group.” this had the interesting effect of making everyone on the train think that I knew everyone else who was knitting. I just lied and acted like I did. Shopping was a bit of challenge
since my messenger bag made me a little too oversized for many of the booths. I
had to constantly make sure that I wasn’t going to spin around and knock over a
display of glass needles or soemthing. I detailed most of the shopping in the previous post but I did want to also mention
that although i didn’t buy anything from them, but Village Spinning and
Weaving had some amazing hanks of alpaca and cotton that everyone really seemed to like. I am going to keep them in mind for an alpaca sports-bra sweater… Most of us wrapped
up the day at the bar. we felt much more comfortable around each other surrounded by yarn AND drinks. 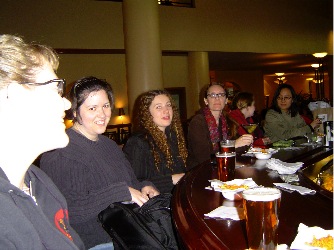 sorry for the terrible pictures of everyone, but if someone else would take better pics, i would use them

So, did you see us there?